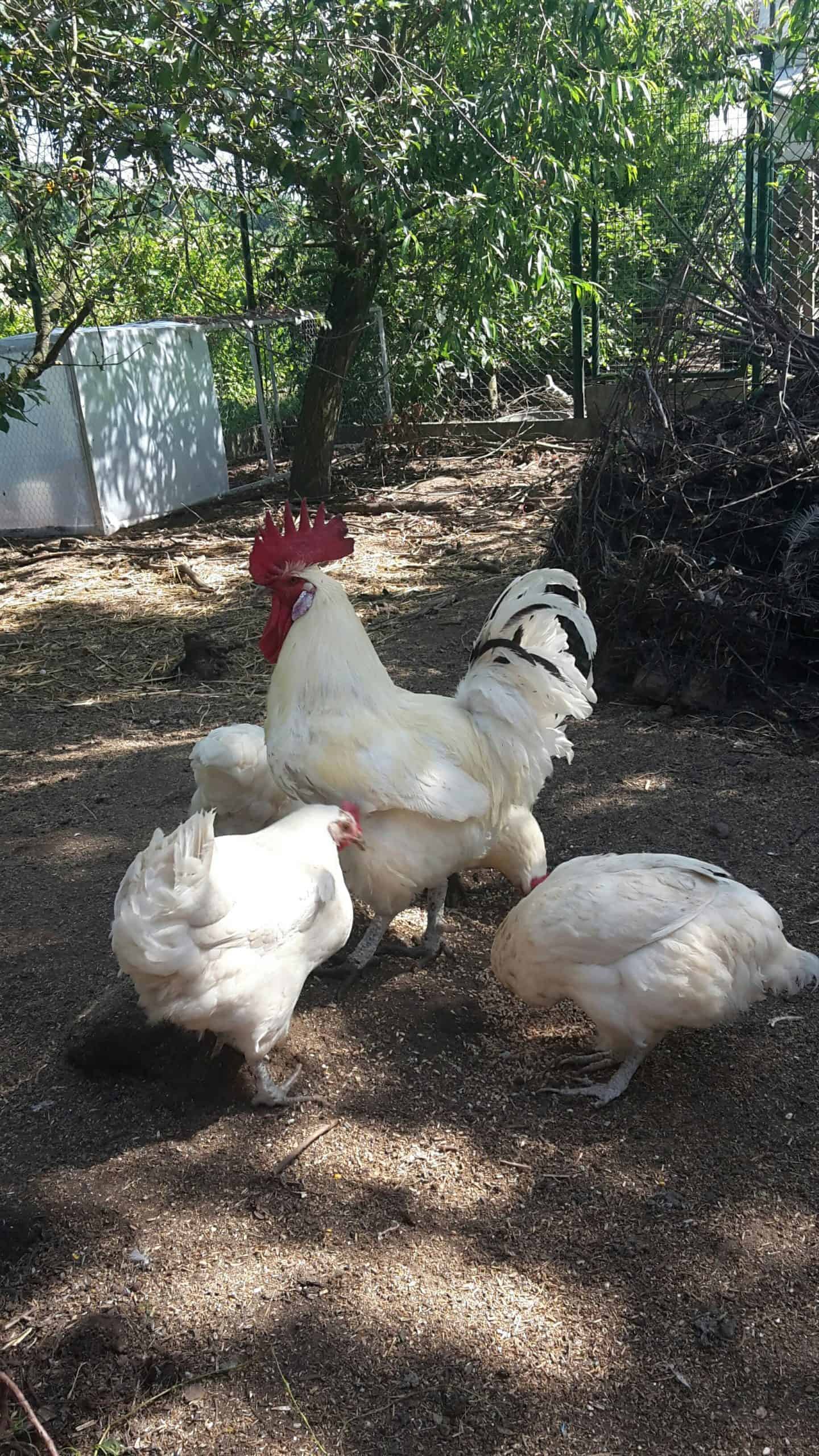 The Poule de Bresse is the best known French breed , originating from the Bresse area ( Rhône-Alpes ). The hen was bred with bright red comb, white plumes and blue-gray legs. If you have read correctly, you may recognize the colors of the French flag in the Poule de Bresse chicken. That makes this chicken a real pride for France. When the chicken has been slaughtered, it has a particularly fine and soft flesh, and very rich in taste. No wonder the variety is very popular in the most famous restaurants.

As a breeder of the Poule de bresse, strict requirements are required. For example, they can only be kept in small companies with a limit of 500 pieces per company. In order to keep all these 500 bresse, one needs a stable of 50m² and a free range of 5000m², which means that each chicken has 10m² at its disposal. The bresse chickens are also slaughtered on the farm itself, so no hundreds of kilometers of transport to the slaughterhouse. This gives the chickens less stress before they are slaughtered.

Characteristics of the Poule de Bresse

This breed, which is centuries old, owes its double name to the fact that the name Bresse is protected. Only chickens that meet certain requirements may be sold commercially under this name. The Bresse is a very special and very old breed of chicken. It is not without reason that it served as a model for the symbol of France; does not his image decorate almost every church tower?

Do you want a perfect relationship with your bird?
Learn how to react on your birds behaiviour with this course, really worth it!

The habitat of the Bresse has been a strip in the east of France for more than 400 years. The area is about 100 km long and 40 km wide. In the northeast are the ridges of the Jura and in the southeast are the Alps. This habitat, a piece of an area that has traditionally been “ BurgundyIt is bordered on the east by the river Saône and on the south by the small watercourse Chaleronne. The soil is very fertile and there is plenty of water. Lovers of wines know that those bottled from the meadow environment are also known and praised worldwide. This also applies to the poule de bresse, whoever has tasted it once doesn’t want anything else. This is what the locals say, and have to say that it is indeed the best chicken I have eaten. Land grouse type chickens came here before the year 1500. After all, the farmers had a strong medium of exchange, the good Burgundy wines. The chickens came from different regions and were related to the Mediterranean sea breeds, the Brakel and Campine fowl. Obtained later, especially at the end of the 19th century, Brahmas, Cochins and Lnagschan’s have been crossed in it. So much so that the pure race was almost gone. Fortunately they realized their mistake in time and they know that they continued with the old bloodlines.

The Poule de bresse is a chicken that looks as you would expect a chicken to look. A proud straight comb that may tip slightly at the back of hens. They have a graceful tail and stand on a pair of sturdy, not too long blue legs. No bells or whistles. In the past there were always three types.

For photos of the other types you can look at the site of more natural living.

If you let a resident speak, you will receive praise and certainly not too short. Yes the locals are proud of their chickens.

The meat is absolutely not dry. It is firm and firm, but tender and juicy at the same time. A Bresse melts on your tongue with a pleasant aftertaste of a perfume with nuts. Don’t forget to eat the crispy roast crust, because there is a layer of fat under the skin that becomes liquid during roasting without penetrating into the meat. Yes, sir, it is a shame to leave something like that. There are countless ways to prepare a poulet de Bresse, with vegetables or with wine, and mushrooms also combine beautifully. Poule de Bresse, the tastiest of the tastiest

When you hear someone say something like that, you get hungry.

What is the secret you are probably wondering. Could it be the type of soil or the water, or is the Bresse such a special variety? Could it be the food? We will lift a little corner of the veil. There are very strict regulations for holding the poule de bresse. De Bresse is a protected brand name and may only be called that if it comes from the Bresse region. They must also be born from special hatcheries. They must have grown up loose on a farm that must meet strict requirements. The price you pay cannot be compared with a supermarket chicken, just like the taste. I have found a site where a chicken costs 23.90 per kilo. There is also really work being done in the region on the rearing of the chicks. They are allowed in for the first 5 weeks, then they go outside. In addition to grass, the food also consists of all kinds of herbs, but also worms, snails and insects. As a supplement they mainly receive cereals, especially a lot of maize.

The entire organization is located in the center of the selection of Bresse chickens. This Center de Sélection de la Volaille de Bresse is located at Béchanne-01370 Saint Etienne du Bois. Here all kinds of research is done, breeding animals are selected, eggs hatched, etc .; this is the heart of chicken-loving Bresse. You can only buy chicks here if you have followed training at the Agricultural Chamber of Bresse. Yet there are people in the Netherlands and also in Belgium who have been able to get some chicks. These chickens are very vital and grow quickly. They have grown at about 4 months. Anyone who wants to let them run free must have a large space, because they take up a large foraging area.

The poulle de Bresse lays quite a lot of eggs and fat for a meat breed, this is often underestimated. About 200-250 eggs are laid per year in my poule de Bresse. The eggs are very large and pure white in shell with the original Bresse chicken. Although the modern Nut Bresse often has light brown hued eggs.

Breeding is best done with an incubator. At 21 days the chickens should hatch, although I leave all chickens eggs in it for 2 days longer. That way, offspring can also come true. There is no point in waiting longer than 23 days, as the percentage of disabled chicks will rise too fast. The poulle de Bresse has a ring size of 20 mm for the cocks and 18 mm for the hens.